If you haven’t heard about the Indian hog deer, it’s a fascinating and unique species of deer. Their habits and appearance are definitely very different from that of the more common whitetail deer that you’re probably familiar with.

Also commonly known as the hog deer, Indochina hog deer, Indochinese hog deer, or Thai hog deer depending on where they’re found and the environment-specific characteristics they have, this group of animals in the Cervidae family is certainly distinct from related species.

Keep reading to learn more about the Indian hog deer, its physical and behavioral characteristics, how it got its name, and how it fits into the ecosystem.

While they’re easily identified as a species of deer, Cervus porcinus has a very different build from most of its cousins. This is due to the way they flee from predators, ducking and dipping down into the brush like a hog to escape rather than bounding and leaping over obstacles. A downward conformation sloping from their hindquarters down to their shoulders and wedge-shaped head allow them to creep underneath rather than over and disappear when danger is near.

While they’re comparatively small, only two to two and a half feet tall, the Indian hog deer is also powerful and stocky. Their short, thin legs are made to power through thick bushes so they can stay hidden, and their thick, coarse brown fur allows them to camouflage effectively, though they may develop white spots in the summer similar to the ones seen on fawns.

The Indian hog deer sports large rounded ears and a bushy white tail. Males are typically larger and more muscular than females, and also boast antlers. They fall within the weight range of 110 to 240 pounds.

Where the Indian Hog Deer Comes From

The Indian hog deer originates in South Asia (in particular India, as the name suggests) and Southeast Asia throughout the Indus River Valley, Pakistan, Thailand, Nepal, Bhutan, and Southern China. Small populations have been seen in Bangladesh and Cambodia as well. They may still exist in China, Laos, Myanmar, and Vietnam, but it’s possible they are extinct in these areas.

They have also been introduced by humans to several countries including Sri Lanka, parts of Australia, South Africa, and parts of the United States, most notably Texas, Florida, and Hawaii.

They will seek out and thrive in environments with dense underbrush and wetlands or marshlands and can sometimes be found in meadow-like clearings as well, all of which provide both the food they require as well as ample opportunity to escape human or animal predators. They typically stay near mid to large sized riverbeds, giving them access to water as an escape route if necessary.

Indian hog deer will avoid forests, opting instead for the grasslands more suited to their adaptations and diet.

Life and Habits of the Indian Hog Deer

The Indian hog deer can be observed grazing and browsing on grass, leaves, and sometimes fruit they find on the forest floor. They will generally only eat at night and are not usually active during the day to avoid vulnerability to predators, including humans. Their natural predators include leopards, tigers, Indian wild dogs, and sometimes Burmese pythons.

As previously mentioned, the Indian hog deer keep their heads hung low to cut through low bushes when they need to escape from a predator, making them difficult to see. They are also adept swimmers and will often choose to flee into the water to thwart an attack.

Indian hog deer are more solitary animals than other species of deer. While their territories may overlap with other nearby individuals, they tend not to form herds and the only time they form small groups is when they’re grazing. Rather than escaping from predators in groups when threatened, they will raise their tails, let out a bark or whistle to alert others nearby, and quickly disperse.

Males can be aggressive in defending their range and will mark the area they’ve settled in with special scent glands to let others know they’re present. While males will often mate with as many females as possible and will fight ferociously with other males during the rut through September and October, it’s also common for a stag to stick with one doe for the season.

When the doe is ready to give birth she will seek out a quiet, hidden spot and leave her white spotted fawn carefully concealed, returning periodically to feed, until it can keep up with her and escape predators successfully. Indian hog deer are about a year old when they reach adulthood.

Indian hog deer can live anywhere from 10-20 years, both in the wild and in captivity. They are not migratory animals, and will remain in about the same area for their entire lives.

Can You Hunt Indian Hog Deer?

In short, yes, you can find places to hunt Indian hog deer, but this will vary from one location to another. The populations have been steadily declining in native areas as a result of hunting, so that’s something to be aware of if you’re interesting in seeking out places where you’re able to hunt them.

Hunting Indian hog deer has been commercialized in areas where populations are indigenous as well as countries where they’ve been introduced and captive bred by humans. This is largely due to the challenge of hunting them as they duck into the brush to escape.

They are a popular type of venison known for their extremely low fat content at about 1%. The seasons for hunting Indian hog deer are November to March in Pakistan, generally April only in Australia with the exception of March to August in some areas, and year round in South Africa.

The Indian hog deer’s most significant contribution to the ecosystem, aside from being prey to sustain other animals, is that they help spread the seeds of the plants they eat in their manure. Otherwise, they are generally considered benign.

The IUCN Red List of Threatened Species designates the hog deer as Endangered with populations listed as Declining and “severely fragmented”. Though they have become threatened or endangered in some places since the 20th century due to hunting, habitat loss, and climate change, there are currently conservation efforts in the works only in protected areas that they inhabit. Habitat loss is the result of their environment being turned into farmland or housing as well as climate change causing their preferred wetlands to dry out, and there are mostly only small pockets of wild individuals remaining.

Conservationists have expressed that the challenge in protecting wild populations of Indian hog deer stems from locals’ inability to tell different species of hog deer apart when hunting, making it difficult to protect the Indian hog deer specifically.

They have also become endangered in some introduced areas, as a combination of hybridization with other species and a lack of genetic diversity within the Indian hog deer family threaten their survival where they aren’t native.

Hawaii has experienced environmental damage and considers the Indian hog deer invasive as they continue to reproduce quickly without the natural predators present in their native environment.

A Different Kind of Deer

Whether you’re an avid hunter or environmentalist, the Indian hog deer is a species worth looking into. They display really interesting characteristics not seen in many other animals. 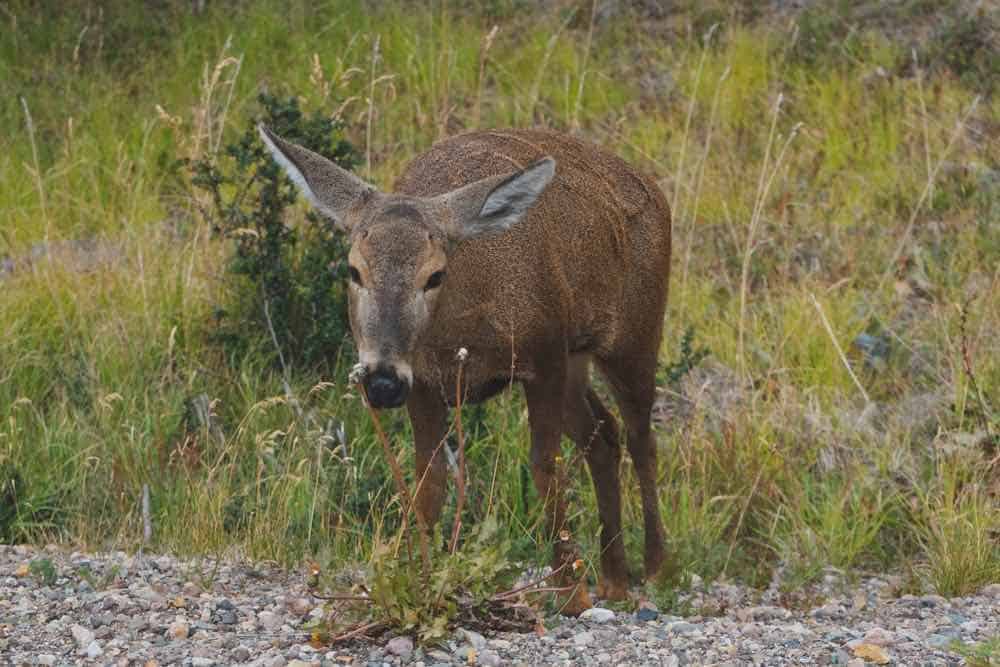 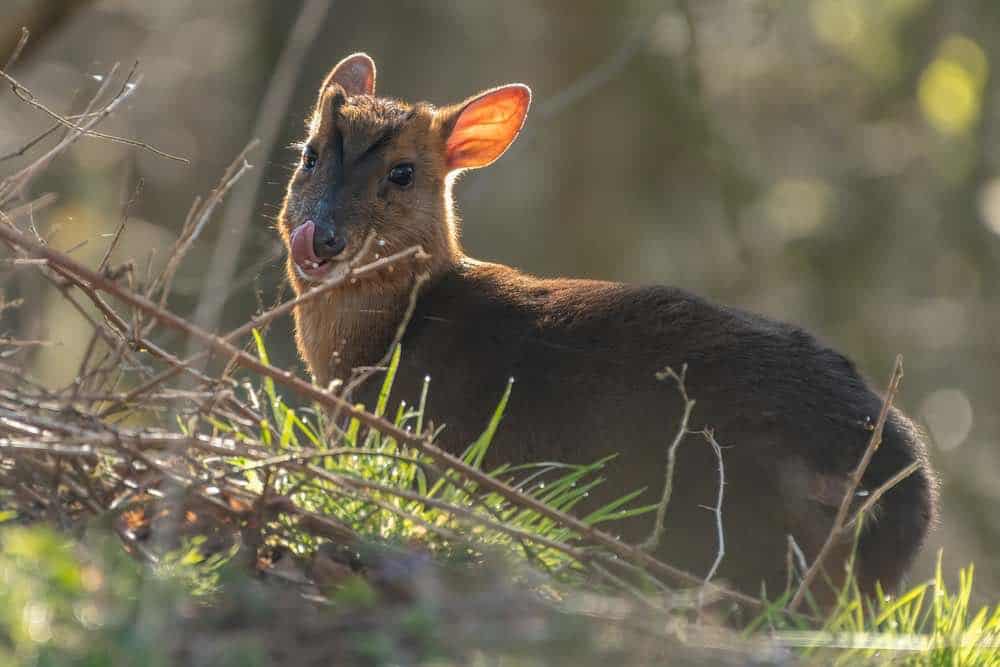 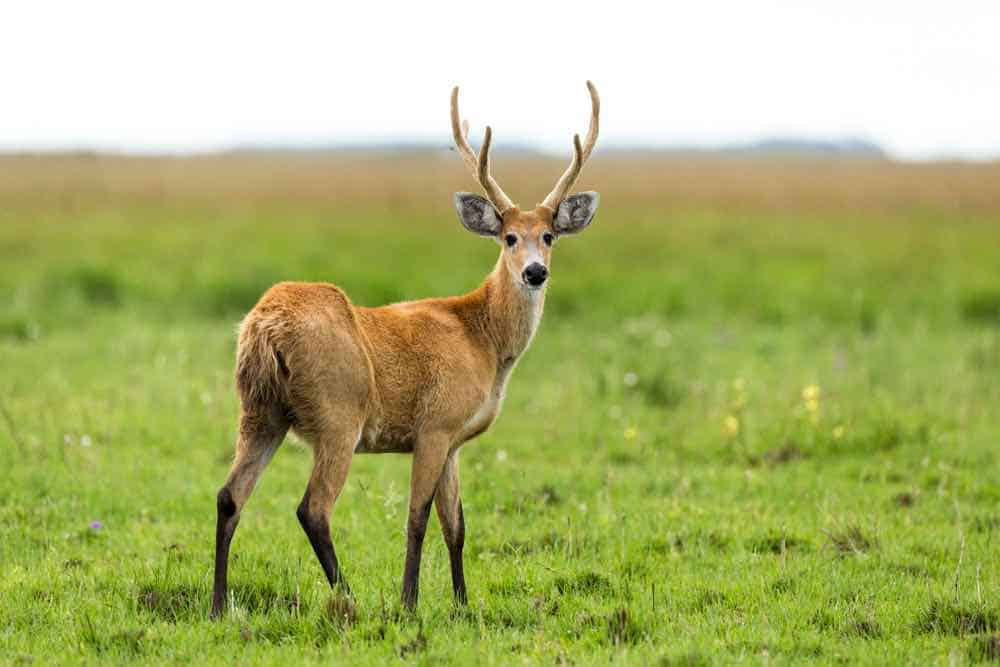