There’s a common misconception out there — typically among those who have never fished before — that fly fishing is overly technical and complicated to learn. However, nothing could be further from the truth.

No matter who you are, you can learn to master fly fishing like the pros. Unlike other fishing methods, fly fishing utilizes a special rod (appropriately called a ‘fly rod’) that provides the weight to cast the lure into a body of water. Traditional push rods require a weighted bobber.

Another key difference between fly fishing and bait fishing is the lure itself. Unlike bait fishing, which presents bait below the water’s surface, the bait is presented to the fish above (or slightly below) the surface and meant to resemble an insect such as a grasshopper or mayfly.

While you can use live bait, many anglers choose to use artificial lures as they provide more value and work just as well.

Now that you have a small understanding of fly fishing, let’s take a closer look into the mechanics and artform:

The Art of Fly Fishing

You may not think of fly fishing as an artform, but it really is. Think about it: you have the outdoors, and gorgeous scenery surrounding you coupled with a beautiful fishing technique that has been used since the Middle Ages.

Depending on the location you’re in, or the type of fish you’re trying to catch, you’ll need to adjust your technique and your fly fishing gear accordingly.

In traditional fishing (typically using a push button fishing rod) the line used is lightweight and thin and the end of the line has a hook, weights, and a float. As I mentioned before, in order to cast bait long distances, traditional rods rely on a weighted bobber (and the bait itself).

The float then controls and holds the bait at a specific depth below the water’s surface, where it is (hopefully) seen or smelled by a fish. The fish will then bite the bait, get caught on the hook and there you have it.

Fly fishing, on the other hand, works much differently. Instead of a bobber and heavy bait, the bait used in fly fishing is extremely lightweight (usually resembling an insect) so it can float above the water’s surface.

The fly itself has barely any weight to it, and it needs to be presented to the fish in a delicate way to avoid being conspicuous and scaring it away. But, how do anglers cast the fly if there’s no weight on the end of the line? It’s simple, the line itself provides the weight.

As we mentioned before, the bait and weights of traditional fishing rods allow anglers to get a good cast. On the other hand, in fly fishing, the weight is provided by the line itself.

The line has 4 main components you need to be aware of, these are:

The backing gives anglers the added length that is necessary to allow the fish to run a bit in a larger pool of water such as a lake or ocean.

The fly line is specially designed to provide the weight needed to make long distance casts. The tippet and leader are the key components for presenting the bait in an unassuming way, so fish don’t see them and get scared away.

When you pick up a fly rod, you should already see the differences from a traditional fishing pole. For one, fly rods are more flexible and usually much longer (usually 9 feet). They’re often made of graphite as well.

The flexibility of the fly rod is purposeful as they are designed to bend when an angler is casting for added distance and the best fly presentation possible.

Finally, the fly reel is also distinct in that it has an open design, as opposed to a traditional fishing pole which typically has a closed reel design.

Another distinct difference between fly fishing and traditional fishing is the technique you’ll use to cast your line. Traditional fishing rods typically have a button. Once you push this button, you’ll maneuver the rod back and then out.

Fly fishing has a wide variety of techniques, some of which can be a bit more complex for beginners to get the hang of. Each of them, though, involve letting out approximately a rod to a rod and a half’s worth of fly line, followed by whipping the fly rod back behind you and finally, back out.

The goal with fly fishing is to get the fly on top of the water to fool the fish into thinking it is a real insect landing on the surface of the water. If you do this right, the fish won’t see the fly line, tippet or leader, and will instead go for the fly itself.

When we say ‘fly’ we’re referring to the bait you use to catch the fish. There’s virtually endless options when it comes to fly designs, however, they are generally broken down into 3 types, including:

The fly you choose to use for fly fishing should depend on a few different factors such as location, type of fish you’re trying to catch, and water conditions.

When it comes down to it, fly fishing is mainly about the experience. Unlike traditional fishing (where you sit for hours and wait for a bite) fly fishing entails standing directly in the water, casting repeatedly until you discover where the fish are hiding.

As you can see, fly fishing is more of an active fishing style, which oftentimes takes you to some of the most scenic locations the world has to offer. 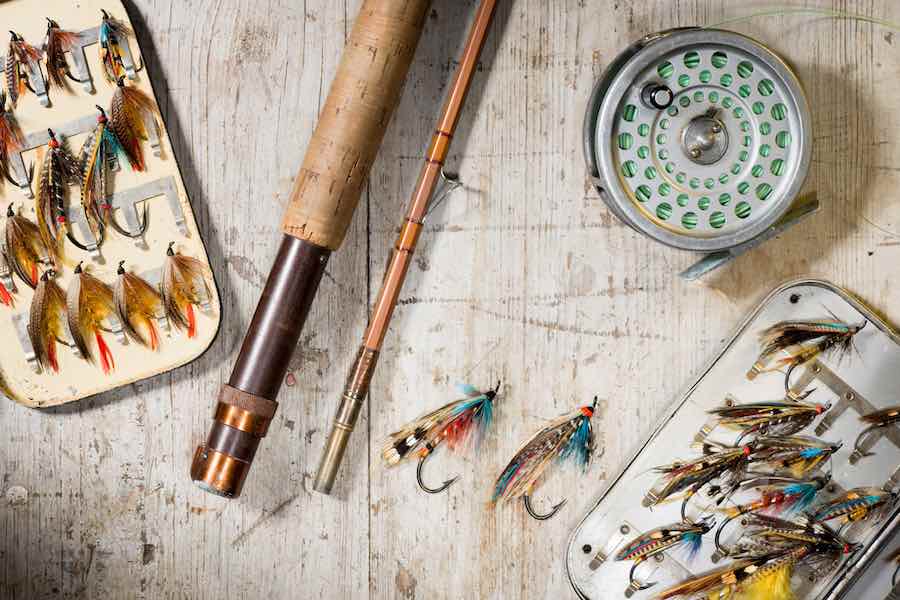